Tom Harper runs a radio station.  By himself.  At the end of the world.

Surviving alone in an emergency radio station, he broadcasts a rock and roll fueled show each and every day in hopes that someone out there might hear him.

Set in a world left desolate and lifeless from an unprecedented catastrophe, Apocalypse Rock is the tale of the last man on Earth. Every day for the past two years, Tom Harper (Doug Powell) has broadcast his own unique radio show from an abandoned emergency radio station, desperately hoping to discover that he is not alone. To keep his sanity, Harper invents an audience for himself by taking pre-recorded phone calls, playing music, and relaying personal anecdotes to anyone who might be listening. But time is running out as his supply of fuel and water dwindles. With only a few days remaining before he must move on into the unknown, the sole survivor of the Apocalypse is faced with the reality that his last outlet of creativity and humanity is ending, and he may truly be alone.

Star Wipe Films is a close-knit team of filmmakers who have come together many times over the last 10 years to explore our passion.  We love movies and telling stories.  The two just naturally go together.  We must be gluttons for punishment because we often come together in Washington DC and Baltimore, for the 48 Hour Film Project (48HFP), where we’ve won countless awards and even gone onto screen at the Cannes International Film Festival Short Film Corner.  We’ve developed a reputation as one of the teams to beat in the area, and many come to the screenings just to see our films.  We love to hear, “Hey, Star Wipe is here!”

Having worked with him on several films, we applaud Doug’s talent as an actor, building our vision for this film around him.  Doug’s story is best told in his own words: 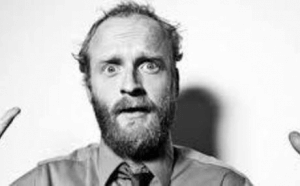 “I’ve been performing professionally for over 13 years, but got my start in the performing arts very early on in my life.  At the age of 6, I recorded my first “comedy” cassette tape with my best friend, which was comprised mostly of silly songs about farts. By high school I had formed a comedic music and sketch troupe and by the age of 21, was performing live around the Washington DC area.”

“I’ve worked with some of the greats, from Jim Brewer and Patton Oswalt to Christopher Titus and Rory Scovel. My career has taken me from clubs like the Improv in Washington DC, to The Friar’s Club in Beverly Hills. ”

“As a stand-up, I have released four albums with the DC-based comedy production company Hahaas Comedy. As a story-teller, I have worked with such prestigious organizations as Speakeasy DC, Story League, and Baltimore’s “Humiliated” series. As a host, I have co-hosted the Frederick 72 Hour Film Festival for the past three years, alongside the very talented Mikael Johnson. I have also worked alongside DC-based videographer Tim Martin, in the production of commercial pieces for Flying Dog Brewery.”

“As an actor, I have worked on several short films with some very talented, young directors and their teams. In 2012, under the Star Wipe Films banner, I was awarded the Peer Gold, Best Actor Award by TIVA DC for my work in “Last Friday In April”, Best Actor for the Baltimore 48HFP film “Welcome to the Neighborhood” and later awarded Best Actor internationally at Filmapalooza for that same film. “Welcome to the Neighborhood” was selected and screened at the Short Film Corner of the 2013 Cannes International Film Festival.”

Let’s begin by saying we are just getting back from Cannes where our short film, Welcome to the Neighborhood screened at the Short Film Corner of the 2013 Cannes International Film Fest.  Welcome to the Neighborhood, featuring Doug Powell, won numerous awards including Best Film at the Baltimore 48HFP which gave us the opportunity to screen at Grauman’s Chinese Theatre in Hollywood earlier this year as part of Filmapalooza where we were awarded Best Actor for Doug Powell and Best Use of Character.  Selected in the top 15 films overall, we were honored to represent the 48HFP at the Cannes Short Film Corner.

But the 48HFP is just one example; basically, filmmaking under fire.  In 2005-2007, we produced Godfather Death, a film we self-financed and crowd-funded for just under $10K, back before crowd-funding was a term.  This was a labor of love with the 65+ cast and crew providing their time free of charge.  Money went towards building a village of six houses and a church, costumes, air fares for our actors, and tons of food.  Many said this was the best project they had ever worked on, even projects with over $100K in budget, and still speak fondly of that project and our production team.  Many of those who worked on Godfather Death are now longtime friends and came back for Apocalypse Rock.

Brian and Karen, the creative backbone of Star Wipe Films, graduated from Full Sail in 2003, which is where they first started honing their craft.  Basically immersed in filmmaking from day one, they had many hours of classroom training and “real world” hands-on experience. They maintain working relationships and strong friendships with an elite group of filmmakers from Full Sail, including the film’s Director of Photography, Orlando Herrera.  Karen’s resume includes working as the director’s assistant on Sydney White, starring Amanda Bynes.  For Rise of the Fellowship, an homage to the Lord of the Rings films, Karen served as production manager.  Brian was the DP and did most of the post-production editing and animation work.

The backdrop of the film is music, and even more so with a film calledApocalypse Rock.  We’ve brought on some great bands and musicians with not only a great sound such as Fame Killer, The Object and the recently added YouTube hit, Emily Davis, but those with a strong following in the Baltimore region, including Arden, Wild Honey, Lucas and the Lovelys, Hollywood, Heavy Lights, Crimson Wave and The Great Heights Band. In fact, Jeff Eben from Fame Killer is writing special music for our film.  This film will provide an opportunity for these bands to get some much deserved attention.

And if you read through all of that, you must really like us.
You deserve a medal.
Here you go.