On Saturday, June 14th, Team Star Wipe Films headed to Doswell, Virginia to embrace the challenge that is Tough Mudder, “Probably the Toughest Event on the Planet.” If you’re not acquainted with this particular mud run, it’s not your typical race through the mud. Each course is 10-12 miles in length with over 25 obstacles.  All are challenging and require your teammates to help you make it through. In fact, Tough Mudder constantly reminds you that it is not a race, but a challenge event.

Along this long, tiring road, we decided up the ante and carry a boombox to blast our favorite psych-up tunes. Here are some pictures of our fearless Star Wipe Films/Apocalypse Rock team. 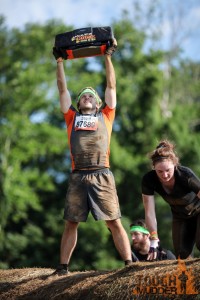 Director, Brian Pennington, holds the boombox skyward to encourage others to press on, as Costume Designer, Bethany Hamilton, climbs over the hay bales.

Grip, Ean Saltzman, carries the 1st Assistant Camera, Jonathan Rosenberry, for the Warrior Carry, as they blast some tunes via the boombox.

Star Wipe Films waves their flag at the starting line.